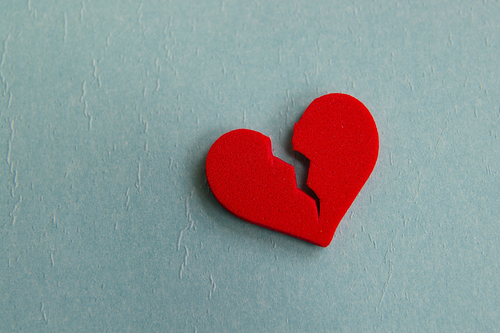 I came home to meet the exterminator at my house yesterday afternoon and while I usually continue working when I run home, instead I turned on the television and went in to the kitchen to make lunch. The television was on CBS and The Talk was on. I have never watched this show before. They were talking about a couple (I’m assuming a celebrity couple) who recently broke up after dating for eight months. The topic of discussion was how long should it take someone to get over a breakup.

One cast member said that because it was only 8 months (a shorter amount of time) that it might actually take longer to get over because at that stage there is still so much positive. Another woman stated that it only takes her 30 minutes to get over a relationship, because that’s how long it takes for the pizza to arrive. Another cast member said that jumping in to another relationship may speed the process along. Every one has his/her opinion. Here are some suggestions for getting over a relationship breakup.

– Allow yourself time to properly grieve. Don’t just try to “get over it”, but instead allow yourself to feel – be sad, angry, and whatever other emotions come up for you.

– Rather than focusing on just the positive things about your ex and the relationship, remember the not so good things and the things that bothered you about your ex.

– Take care of yourself. It is important to practice self love and to nurture yourself. Feeling good about ourselves helps us move forward and trust that we will not be alone forever.

– Smile…even if you don’t feel like it! Fake it until you make it! This can help you be less anxious and happier in the moment.

– Remind yourself why the two of you were not good for each other.

– Allow yourself time to think about the relationship (this is healthy) but don’t obsess or dwell! Think about things including the role you played in both the relationship and the break up. Remember, taking responsibility is different than placing blame. Blaming will not be helpful.

– Remove memory triggers (but not permanently). You don’t want a constant reminder of the relationship around but that doesn’t mean you have to completely get rid of the memories. So maybe take the pictures off your wall, but don’t throw them out. In addition, you might want to change your patters in order to avoid memory triggers for a while at least. Perhaps you can drive a different way to work or try a new restaurant rather than one that you frequented with your ex.

– Don’t try to seek revenge or scheme to get him/her back. Focus on yourself, bettering your life, being successful, and letting go!

– Work on being the best version of YOU! Remember that the best (and most productive) move for you in the long run is to work on being a more awesome YOU and figuring out ways to feel happy and satisfied with yourself!

– Seek professional help if you are having trouble coping.